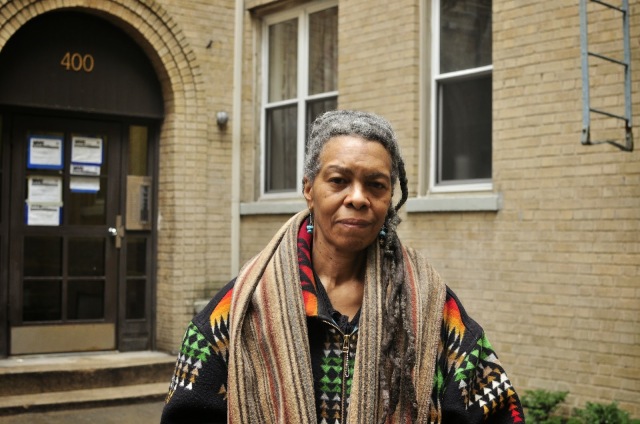 This is part of a series of articles examining how New York’s rent laws affect tenants. Check back every Monday to read more profiles of New York Tenants.

Alicia Blackwell is a lifelong New Yorker, born and raised in West Harlem. In the past seventy years, she has seen the rich culture of her neighborhood flourish and seemingly disappear before her eyes. In her youth, Ms. Blackwell took advantage of everything her vibrant neighborhood offered, playing basketball, dancing, and performing bass guitar. She studied foreign languages at City College of New York and travelled the world with dreams of becoming a translator. She is exceptionally independent, and when asked if she was ever married, she smiles and responds without regret: “I didn’t have time.” When she reminisces about growing up in West Harlem, you can easily picture the vibrant, bustling community full of influential politicians and artists. “Harlem was a goldmine of opportunity and wealth,” Alicia remembers. “I could see the development happening in the rest of the city, and I knew from a long time ago, this neighborhood was going to change.”

Alicia was right. Wealthy investors bought the land and popularized the false narrative that Harlem was impoverished and destitute before they came along to “improve” it. Rather than helping the community to flourish, they transformed it until it became unrecognizable. Landmarks like the Apollo Theater, once home to jazz and soul legends and still the host of notable cultural events, are now surrounded by corporate giants who have no interest in preserving West Harlem’s culture. While Harlem still has plenty to offer, Alicia’s negative experience with gentrification and harassment have deeply colored her view. Now, Alicia regrets, “Harlem seems to be just a name.”

The gentrification in West Harlem is the result of city planning and developers that prioritized profits over people and weakened the city’s once strong rent laws. Developers and landlords continue to push for further deregulation, using current rent deregulation laws to easily remove a unit from rent regulation when it becomes vacant.  This has created a significant financial incentive for landlords to push tenants out of their homes, with many landlords resorting to harassment and other illegal tactics.

When Alicia’s building was full of long-term Harlem residents invested in the community, it had an active tenant association and better opportunities to hold the landlord accountable. As the neighborhood changed, the tenant association disappeared. Now, the landlord is actively harassing tenants. Many tenants are short term residents and the longer term residents are fearful of becoming the next target.  Now, Alicia is one of the few rent controlled tenants left in her building, part of the city’s dwindling population of rent controlled tenants, who are generally elderly New Yorkers living off of extremely fixed incomes.

Alicia first reached out to Met Council when her landlord deliberately cut her phone line, jeopardizing her safety by taking away her ability to communicate with her family, friends and doctors.  With a strong incentive from Albany to create vacant apartments, the landlord has also been using construction as a form of harassment. The landlord’s “construction” has led to ceilings that appear ready to collapse; increasing numbers of cockroaches due to holes; and dust and fumes so intense it is causing health problems. Alicia is a cancer survivor with other health issues who should not need to decide between homelessness and living in an apartment building with dangerous conditions.

The landlord’s failure to address these concerns is symptomatic of a larger problem in the city that has it’s roots in our weak rent laws, particularly vacancy deregulation. One of the most concerning elements of our housing crisis is that landlords commonly go after seniors first, because either they view them as easy targets without support networks to help them fight back or because their rents tend to be among the lowest. Alicia knows it is not a coincidence that the landlord is going after her, they cut the phone lines because that really only affects seniors, who don’t all have cell phones. “The people who are the lifeblood of the city are seniors,” Alicia remarked, “I don’t see how human beings could want to destroy the lives of people who have come before them.” They will continue to harass her until our laws are strengthened.

Alicia isn’t alone in this fight. Everyday, landlords use various methods to try and force tenants to leave their buildings. With the fight to renew the rent laws in June quickly approaching, her message to Albany legislators is simple, “wake up.”

De Blasio heads to Albany to push rent regulations, 421-a »
« Stop the Flood of Cash